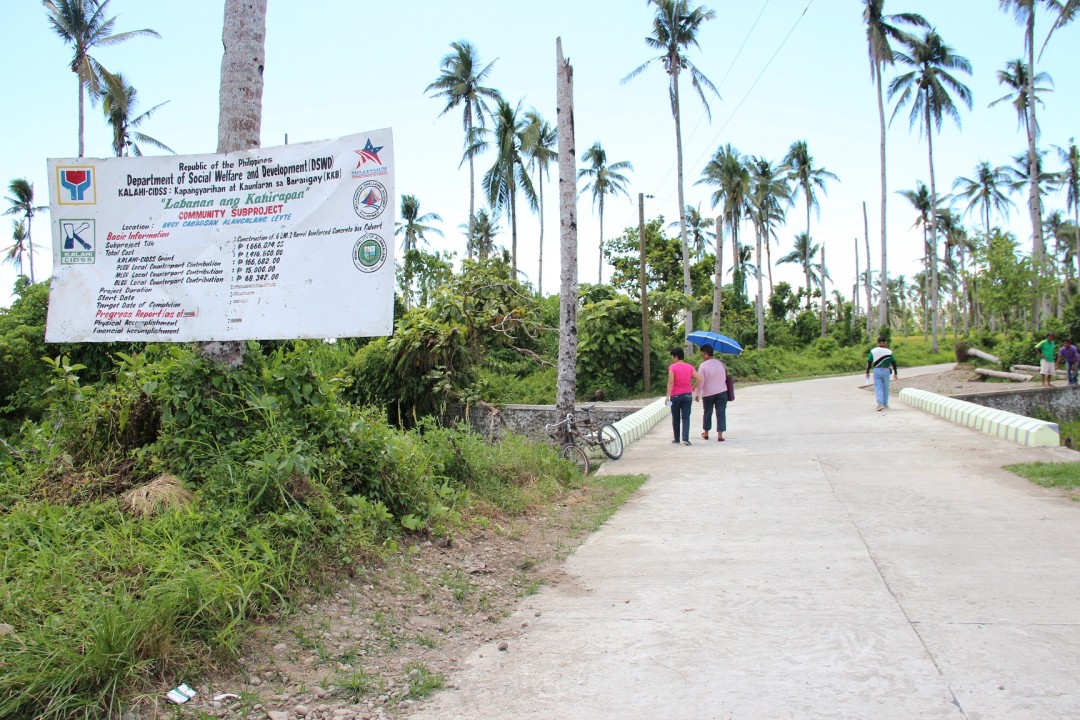 Alangalang, Leyte – The San Juanico Bridge is known as the “Bridge of Love” because it connects Samar and Leyte. However, residents of Barangay Cabadsan in this town also want to claim the title for their small bridge – a two-barrel box culvert.

For them, this structure, which was built through Kapit-Bisig Laban sa Kahirapan-Comprehensive and Integrated Delivery of Social Services (Kalahi-CIDSS), of the Department of Social Welfare and Development (DSWD), is the true “bridge of love”, because it is a testament of their unity and hard work to make their community a safe place to live in.

The box culvert serves as a bridge for development and bayanihan in Barangay Cabadsan in Alangalang, Leyte

Love for community Before Kalahi-CIDSS became part of their lives, the people from the village proper and nearby sitio had nothing to do with each other – and they preferred it that way. While there was no open hostility between the two, there was an undercurrent of tension present, with one group believing that the other thought too highly of itself. Cristina Gatila, 43, a resident of the sitio described the former situation. “Dati snob ang mga tao (The people were snobs before),” she said with a cheeky grin. As a program that utilizes the community-driven development (CDD) strategy, Kalahi-CIDSS provides citizens from the poorest municipalities across the Philippines with trainings so they can gain knowledge and skills to access resources and implement projects that will help them address their community’s most pressing needs. As such, when Kalahi-CIDSS entered Brgy. Cabadsan, the residents had to learn to work with each other if they wanted to solve their problem.

The love for their families and for their village enabled the the community volunteers of Barangay Cabadsan in Alangalang, Leyte to work together to construct their box culvert through Kalahi-CIDSS

For many of the volunteers, the best part of working together is the fact that they actually got to know each other. Looking slyly at her companions, Vicky said with a grin, “Dati, hindi nila kami pinapansin. Ngayon, sabay-sabay na kami kumain (In the past, they ignored us. Now, we eat together).”

The construction of the box culvert truly connected the gap between those living in the proper and the sitios in Barangay Cabadsan in Alangalang, Leyte

Village folks built sea wall that saved them from Yolanda →