Village folks built sea wall that saved them from Yolanda 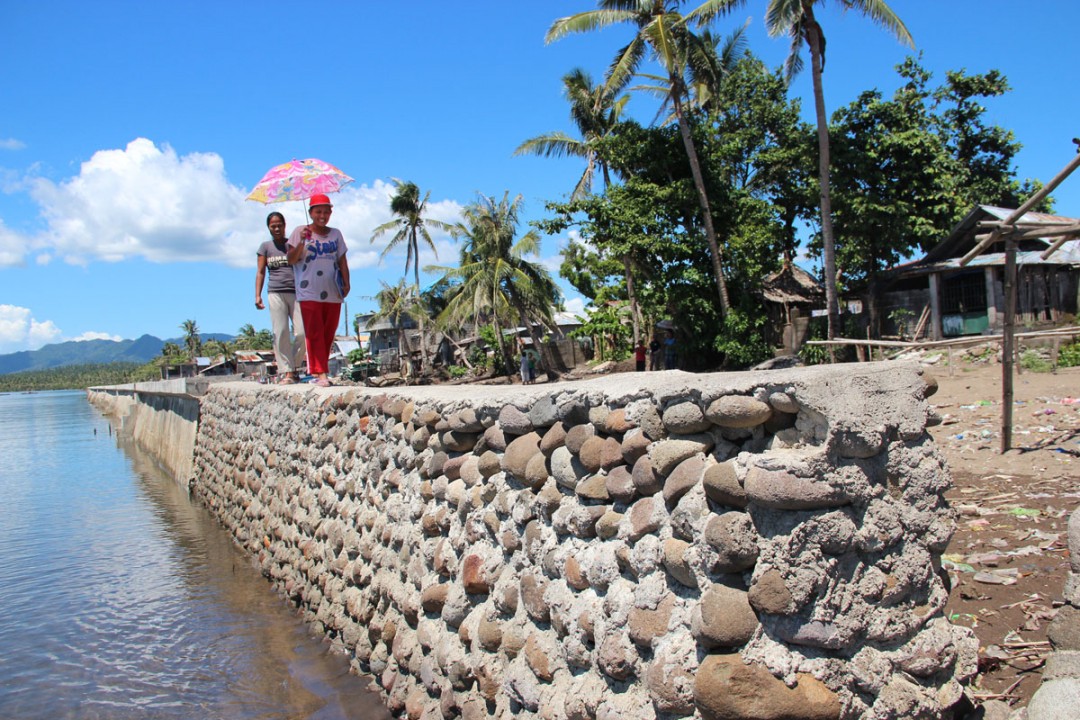 Barugo, Leyte – If there was one thing that Nelida Balaes, 31, is thankful for at the time when Typhoon Yolanda hit the country, it was the fact that they had a sea wall that protected them from the said disaster.

“Kung wala iyan, tapos na kami (It would have been the end of us if the sea wall was not there),” Nelida shared, her statement all the more chilling because of the matter-of-fact way she said it.

It was the predicted intensity of the typhoon that prompted the local government to impose a forced evacuation on the night of November 7 in areas along its path.

On the eve of the typhoon, the households living near or along the coastline of Barangay Minuhang were asked to evacuate. While they all complied with the order, they tried to accomplish one thing before the typhoon hit the country. They worked as much as they can on their sea wall, which they got through Kapit-Bisig Laban sa Kahirapan-Comprehensive and Integrated Delivery of Social Services (Kalahi-CIDSS), one of the poverty alleviation programs of the Department of Social Welfare and Development (DSWD).

They knew that given the predicted intensity of Typhoon Yolanda, they needed all the help they could get to keep their homes – and their lives – protected.

Their fears had basis. Maricel Velasco, 30, shared that Brgy. Minuhang was severely affected by Typhoon Basyang in 2010.

Moreso, it was not necessary for foul weather to occur to trigger the problems in Brgy. Minuhang. During high tide, it was common for sea water to enter the homes of the residents.

It was these problems that prompted them to identify the construction of a sea wall as the sub-project they needed to answer their most pressing need. Not wanting to once again experience the terror they felt when Typhoon Basyang hit the country, they strove to do as much work for their sub-project as they could on the eve of ‘Yolanda’ to try to keep their village safe.

Their fears happened. From their vantage point from the evacuation centers theyfled to, some of the residents witnessed the wrath of ‘Yolanda’.

Saved by the sea wall

Recalling what they went through, Honesto Balaes, 54, could only say, “Kungwala iyong sea wall na iyon, washed out na itong barangay (If the sea wall was not there, the barangay would have been washed out).”

It was the wish of the residents of Brgy. Minuhang to keep their village protected from the seas, so when Kalahi-CIDSS provided them the opportunity to do just that, they did not hesitate to jump at the opportunity.

As a community-driven development (CDD) program, Kalahi-CIDSS seeks to help people rise from poverty by providing them the trainings and resources so the citizens themselves can have the power and the capacity to pursue their own development.

When Kalahi-CIDSS came into the picture, the residents of Brgy. Minuhang did not hesitate in identifying the construction of a sea wall as the sub-project they needed the most. Neither did they show reluctance in volunteering to ensure that the sea wall be implemented as planned.

“Para sa ikakaupay ng barangay (For the betterment of the community),” saidNelida, when asked why she served as a Kalahi-CIDSS volunteer who helped work on the sea wall.

Because of the CDD strategy of Kalahi-CIDSS, the residents did not just get a sea wall, they were also able to get a lot of other things from the project.

Nelia Colata, 47, could not help but agree, particularly when it came to participating in physical labor, having served as one of the laborers herself, hauling rocks to be used in the construction of the sea wall.

She said, “Dati, ang babae akala ko, hindi kaya ito. Iyon pala, kaya ko rin angkaya ng lalaki (I thought women were not able to do this. It turns out I can do what men could),” with pride in her voice.

They even ensured that the quality of their sea wall will not be compromised, even if they were already the ones who were working on it in the first place.

Honesto shared, “Watchdog kami. Binabantayan namin ang pag-implement (We serve as watchdogs. We monitor how it is being implemented).”

Such was the community’s dedication to Kalahi-CIDSS that they tightened the rules to ensure that the residents take part in this.

She added that they also used the same rule to ensure that the Family Development Sessions of the Pantawid Pamilyang Pilipino Program, the Conditional Cash Transfer (CCT) program of the DSWD, will also have good attendance.

Their efforts paid off. Even if the waves rose above the sea wall during ‘Yolanda’, the structure only had minimal damage to it.

Still, the residents remain vigilant. Honesto shared that when the community identified that the minor damage to the wall was due to the lack of a culvert on it, they decided among themselves to include it even if it was not part of the original design, and this was approved by the engineer of the Kalahi-CIDSS team assigned in the town.

Even so, the problems of Brgy. Minuhang are far from over. Nelida expressed her hope that their sea wall could be extended to cover the length of the barangayalong the shoreline, estimating that only 25% of that distance has been constructed so far.

She said, “Ang areas ng barangay na walang sea wall, either na-wash out angilalim ng bahay, o nawala talaga (The areas in the barangay that were not protected by the sea wall either had their floors of their homes washed clean, or these were washed out completely).”

She shared that her home belonged to the latter, having been completely destroyed during ‘Yolanda’, which is why she, along with the other residents of thebarangay, hope that they would be able to continue their sea wall.

She concluded, “Maprotektahan sana ang buong barangay (Hopefully the entirebarangay will be protected).”

Even with these concerns, the Kalahi-CIDSS volunteers who worked on their sub-project are proud of what they have accomplished, even if the sea wall has yet to be completed.

Honesto summed up what he and his fellow volunteers felt with his statement:“Mawala man ako, proud ako na masasabi kong isa ako sa nagpakahirap para sa barangay (Even if I will no longer be around, I am proud to say that I was one of those who worked hard for our barangay).”###